Review: The Hero of Ages (Mistborn Book #3) by Brandon Sanderson

Please only read this review if you have read the first two Mistborn novels; The Final Empire and The Well of Ascension, because you will be spoiled.

What it's about (Goodreads): Tricked into releasing the evil spirit Ruin while attempting to close the Well of Ascension, new emperor Elend Venture and his wife, the assassin Vin, are now hard-pressed to save the world. This adventure brings the Mistborn epic fantasy trilogy to a dramatic and surprising climax as Sanderson's saga offers complex characters and a compelling plot, asking hard questions about loyalty, faith and responsibility.

What I thought: At 724 pages, The Hero of Ages is a beast of a book. I actually began reading it last summer and I got about 300 pages in, but I put it down because I felt that the pacing was quite slow. Then, the other night I remember that I'd promised my friend that I'd read it over the summer so that we can talk about it when we go back to school, so I picked it up again. I'm so happy that I did. The plot really took off.
I believe that The Hero of Ages takes place two years after the events of The Well of Ascension. At the end of the previous book, we discovered that the whole prophecy was a lie and that Vin accidentally released ruin, who wanted to destroy the world and also Elend became a Mistborn.
Luthadel and the rest of the empire are on it's knees, so Vin and Elend are forced to search the land for food and hopefully find some hints left by the Lord ruler on the way. They take control of the other cities in the empire. Although the pacing at the beginning is quite slow, it all builds up to form an outstanding conclusion and it is definitley worth ploughing through the more mundane parts of the novel.
There is stunning character development in this novel. Vin has grown into a confident woman and a powerful Allomancer. Elend is no longer an awkward and shy idealist and he has grown into a confident leader. Spook, who was rather cast aside by the other crew members in the previous novels, plays a very important role here.
The magic system in this world is so intricate and well thought out. I can visualise the fight scenes so easily in my head. Man, Sanderson knows how to right a good fight scene.
The questions that I had at the end of book two are definitely answered in this book. I was mind blown by the ending. I did not seen it coming at all. Everything came together and I am in awe of Sanderson's skill. I'm not sure if I will read the continuation of this trilogy because it contains different characters, but maybe sometime in the future I will.

Favourite quotes: "Somehow, we'll find it. The balance between who  we wish to be and whom we need to be. But for now, we simply need to be satisfied with who we are."

"You hate change. I hate it too. But things can't stay the same - and that's well, for when nothing changes in your life, it's as good as being dead." 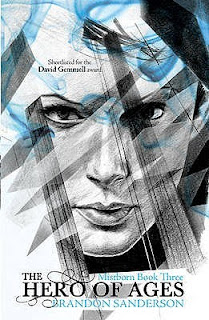 This picture is from Goodreads.